In 2019, the Reformed dormitory in the 9th District, on the plot of the Dunamellék Reformed Church District bordered by Ráday Street, Köztelek Street, Markusovszky Square, and Biblia Street, burned down under tragic circumstances. In its place, on the side facing Markusovszky Square, the new dormitory wing has now been completed, but in addition, the central building bordered by Ráday Street and Köztelek Street, acquired in 1912, has also been completely remodelled. In the renewed headquarters building, the bishop's office can be found at 28 Ráday Street and the Faculty of Theology of the Károli Gáspár University of the Reformed Church can be approached from Köztelek Street.

The reformed higher education dormitory located at 28 Ráday Street in Budapest, which burned down in January 2019, and the renovated episcopal headquarters and reformed theology located in the same building complex, were handed over, reports MTI.

At the service before the ceremony, Zoltán Balog, the pastoral president of the Synod of the Reformed Church of Hungary, the bishop of Dunamellék, spoke about how many things were lost in the fire, including a person's life, and "we had to pray deeply, silently, and persistently" so that God would show us in the loss the "the power of his love that turns evil into good". 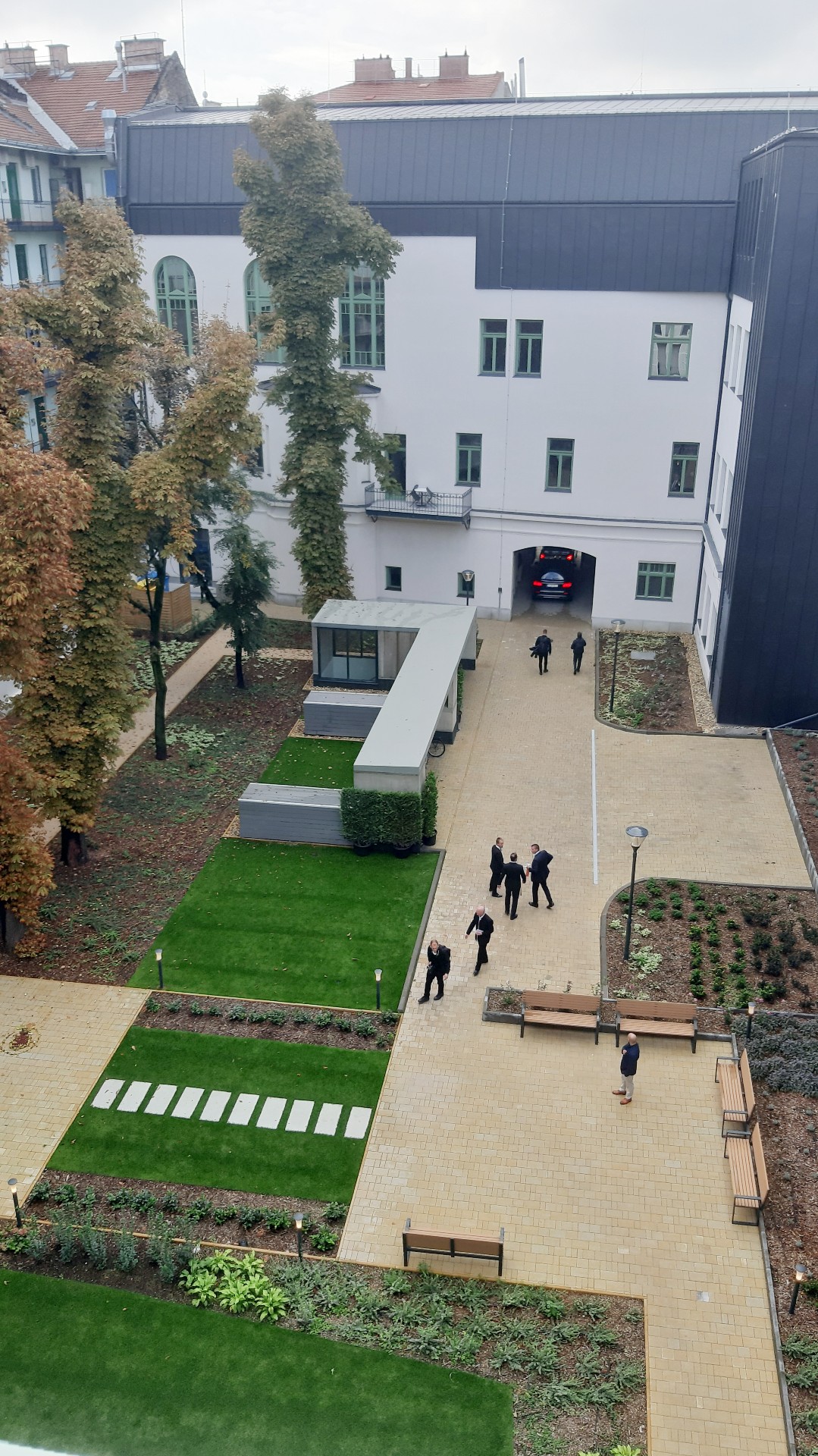 The inner courtyard, opposite the building wing on Ráday Street (Photo: pestbuda.hu)

First of all, "we thank God that we were able to build," he said, adding that they are also grateful for the personal support of the government and Prime Minister Viktor Orbán, the help of the churches and everyone else. He went on to say that God's grace was also manifested in the fact that the church was able to rebuild the complex named Ráday House at a time when "our country, our nation and our church in it were experiencing years of prosperity". Churches, kindergartens, schools, and parishes were built, and now the most important question to be asked is whether "our souls have been strengthened?" Zoltán Balog stressed. 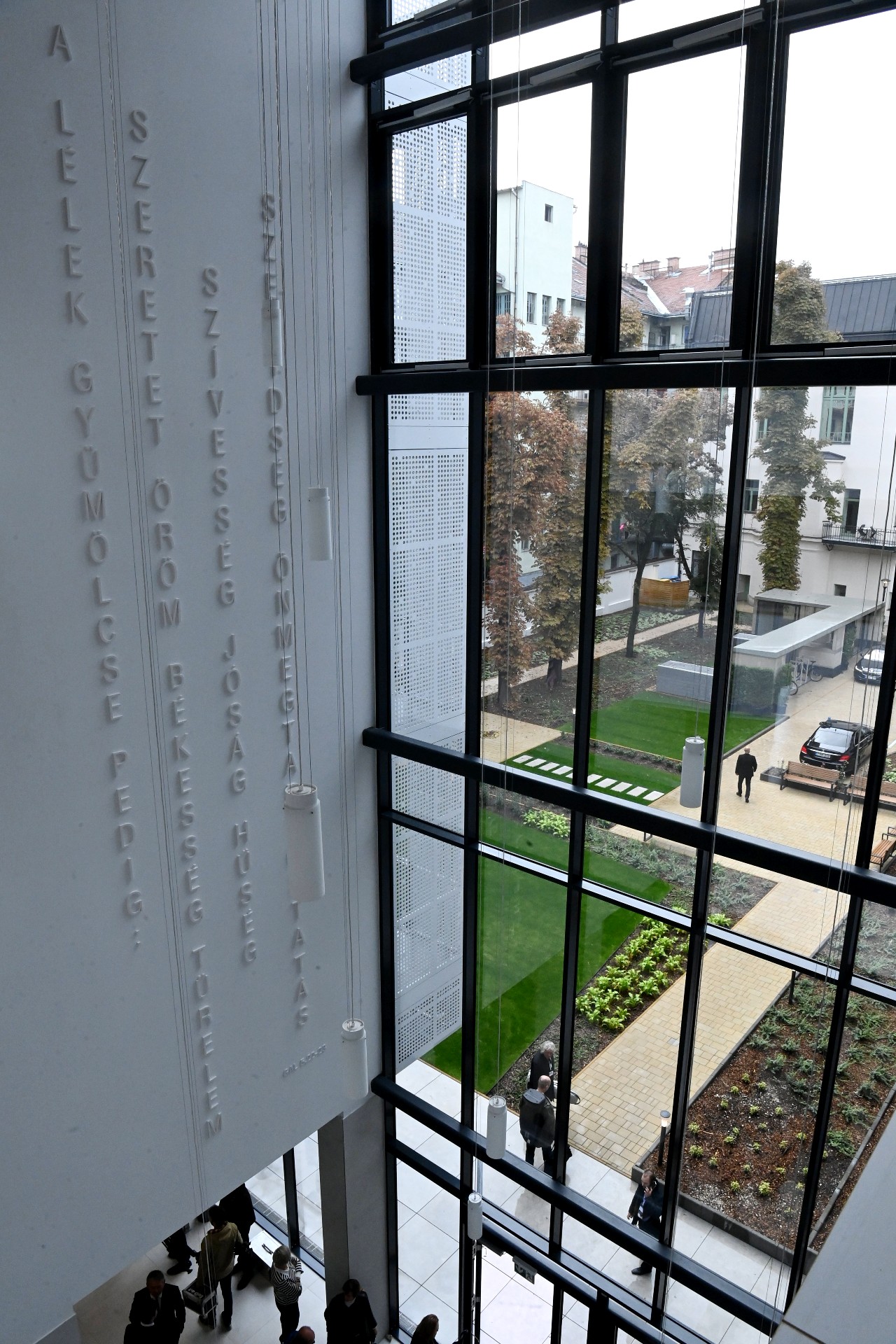 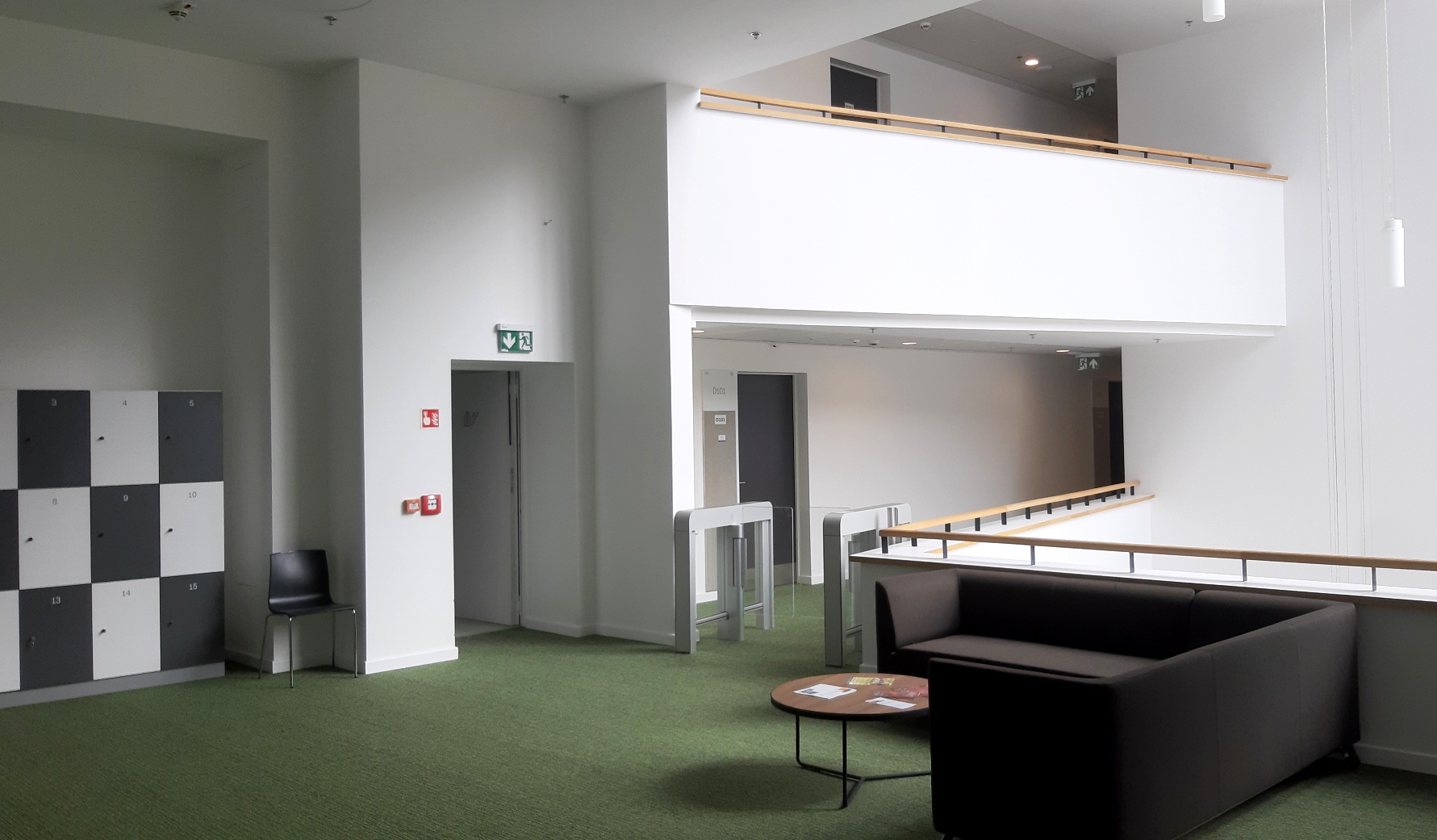 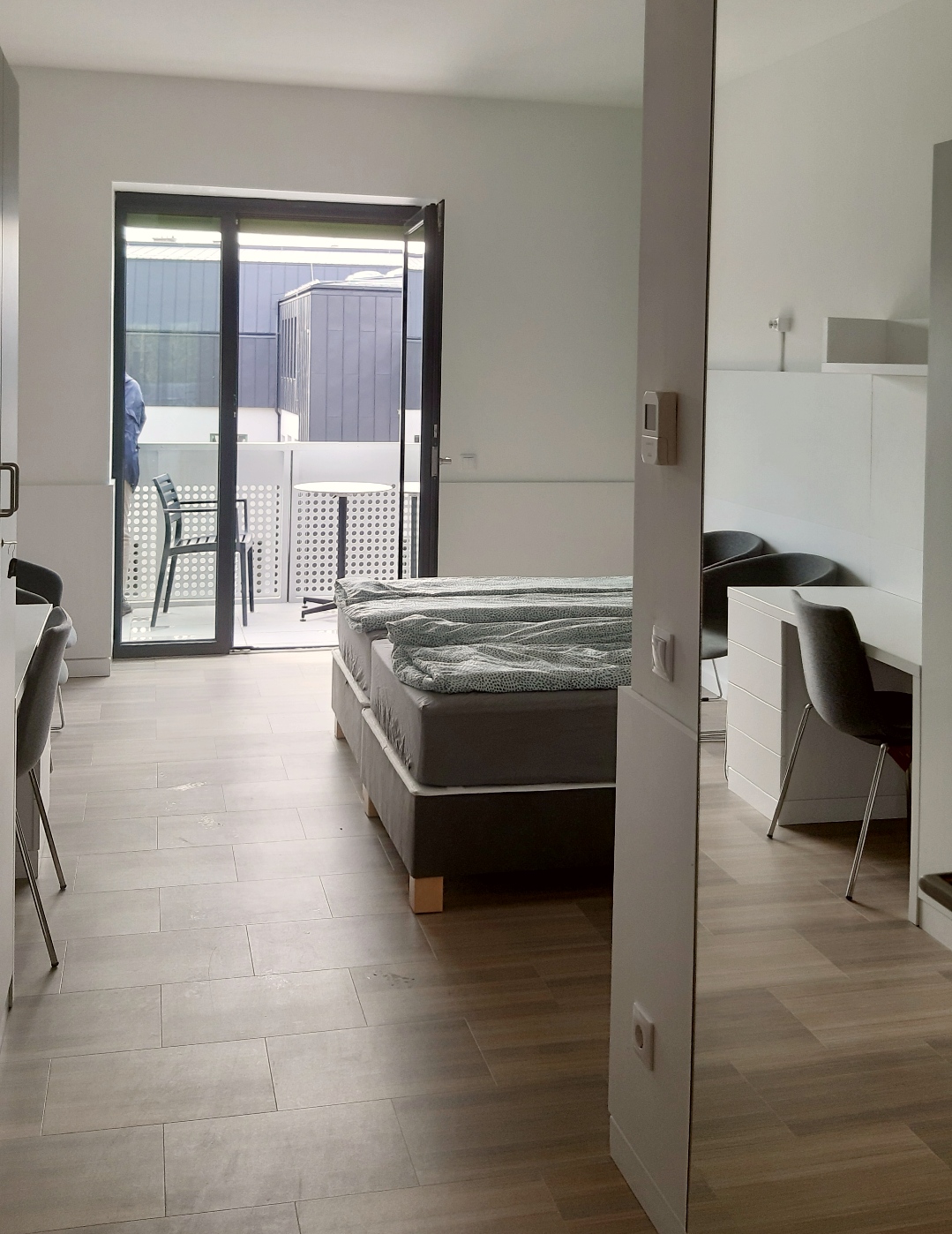 A room in the dormitory (Photo: pestbuda.hu)

In the past period, the church has grown in buildings and service opportunities, but whether we have "grown in spirit" will be decided now: today, tomorrow, the day after tomorrow. Now it will become clear what kind of response the church will give to the "seven lean years that await us" and the confusion of the world.

He put it this way: "if we really want to give a spiritual answer, then we will not forget gratitude even in deprivation. The gratitude that there was prosperity and the strength gathered from it can be used when there is less." Part of the spiritual answer is that we must "carry the burdens together," he said, indicating that he expects the community to take part in carrying the burdens to the best of their ability. Finally, he asked the members of the church to seek God's will together. "Let us pray and think" about what God is saying in this troubled time because the church's job is to pass on the Christian reading of reality, added Zoltán Balog. 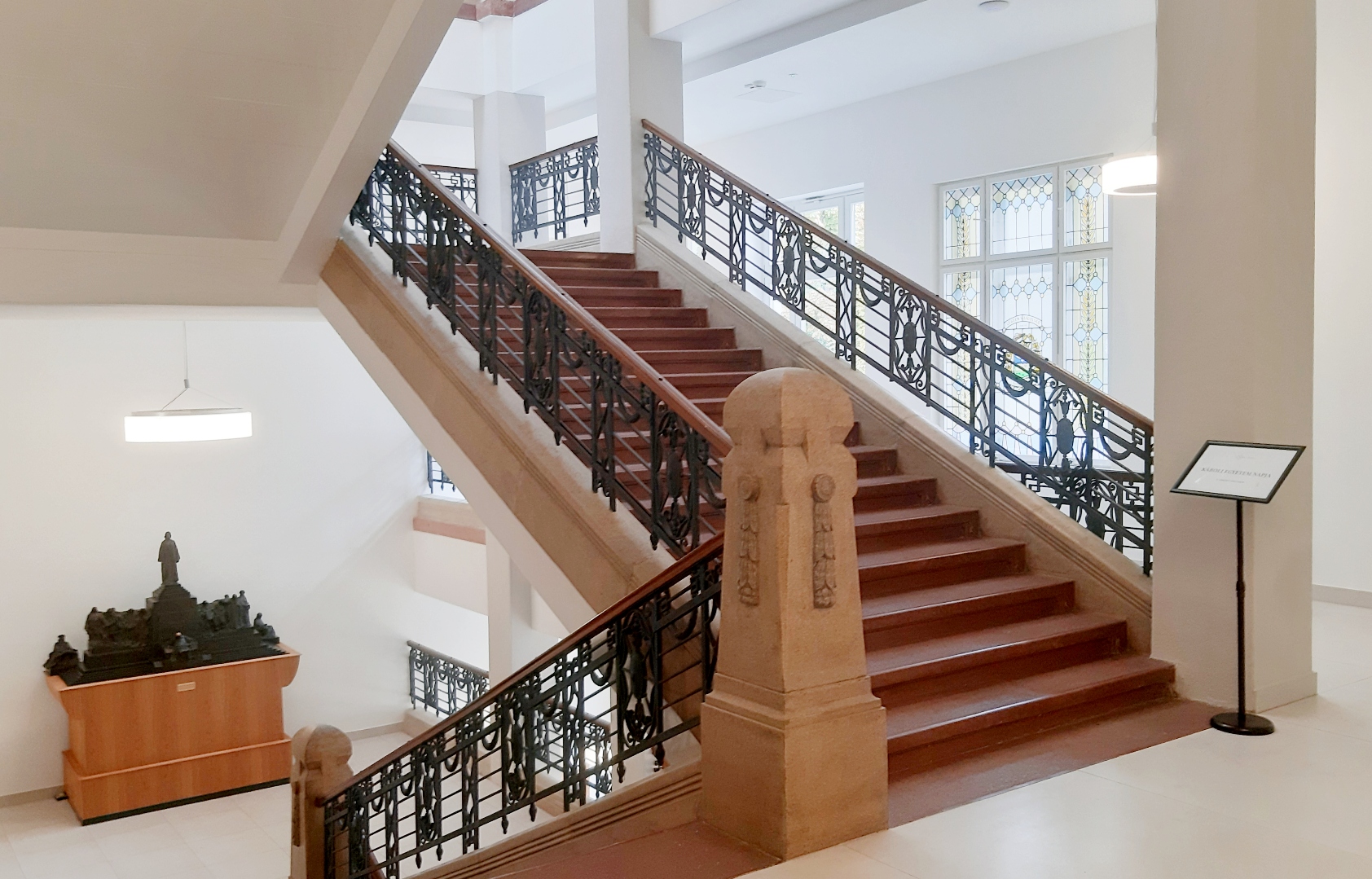 The staircase of the old main building, acquired in 1912 (Photo: pestbuda.hu)

István Bogárdi Szabó, the former bishop of Dunamellék, recalled in his sermon: in January 2019, the day after the fire, standing in the courtyard of the burned-down dormitory with Sándor Veres, the head warden of Dunamellék, they knew it was self-delusion that anything could be saved from the building, and they did not even dare to ask each other the question of what it would be rebuilt from. Then Viktor Orbán entered the "mourning space" and promised the government's help in the reconstruction.

He also said: that same afternoon, the Senate of the Károli Gáspár University of the Reformed Church (KRE) held a crisis meeting to decide on the fate of the students left without a home. By the time the bishop got through to the meeting, he had received dozens of phone calls, the rectors of other universities, and sister churches called and offered their help to the students who would be left without accommodation. And by the following week, when the students could take stock of what was destroyed, so many donations came from all over the world that they made up for the lost items many times over. "It was as if we experienced the miracle of the multiplication of bread," said the Reformed bishop. 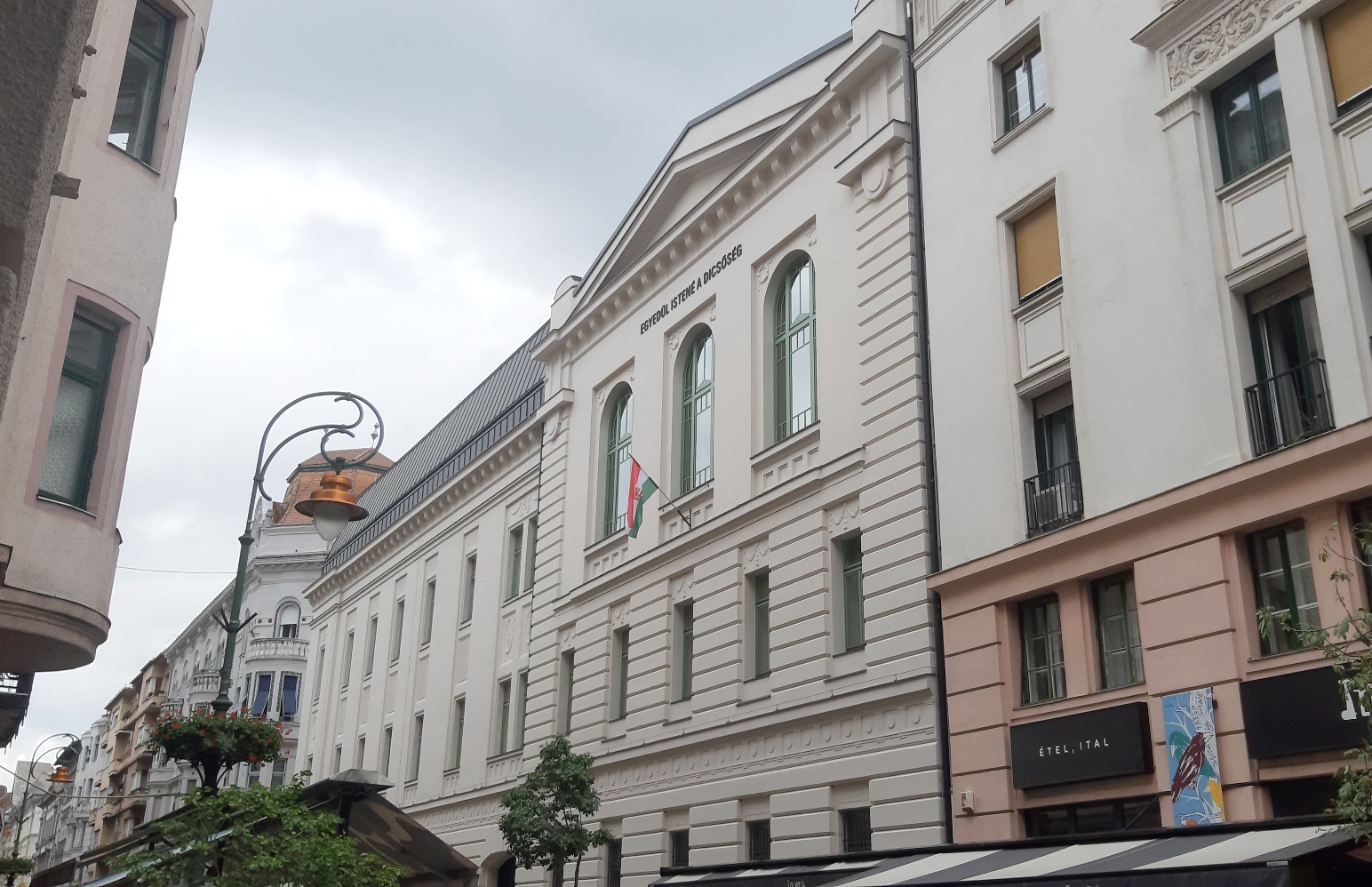 The main entrance is at 28 Ráday Street, from where the bishop's office can be approached. The entire building complex, including the main facade, was renewed (Photo: pestbuda.hu) 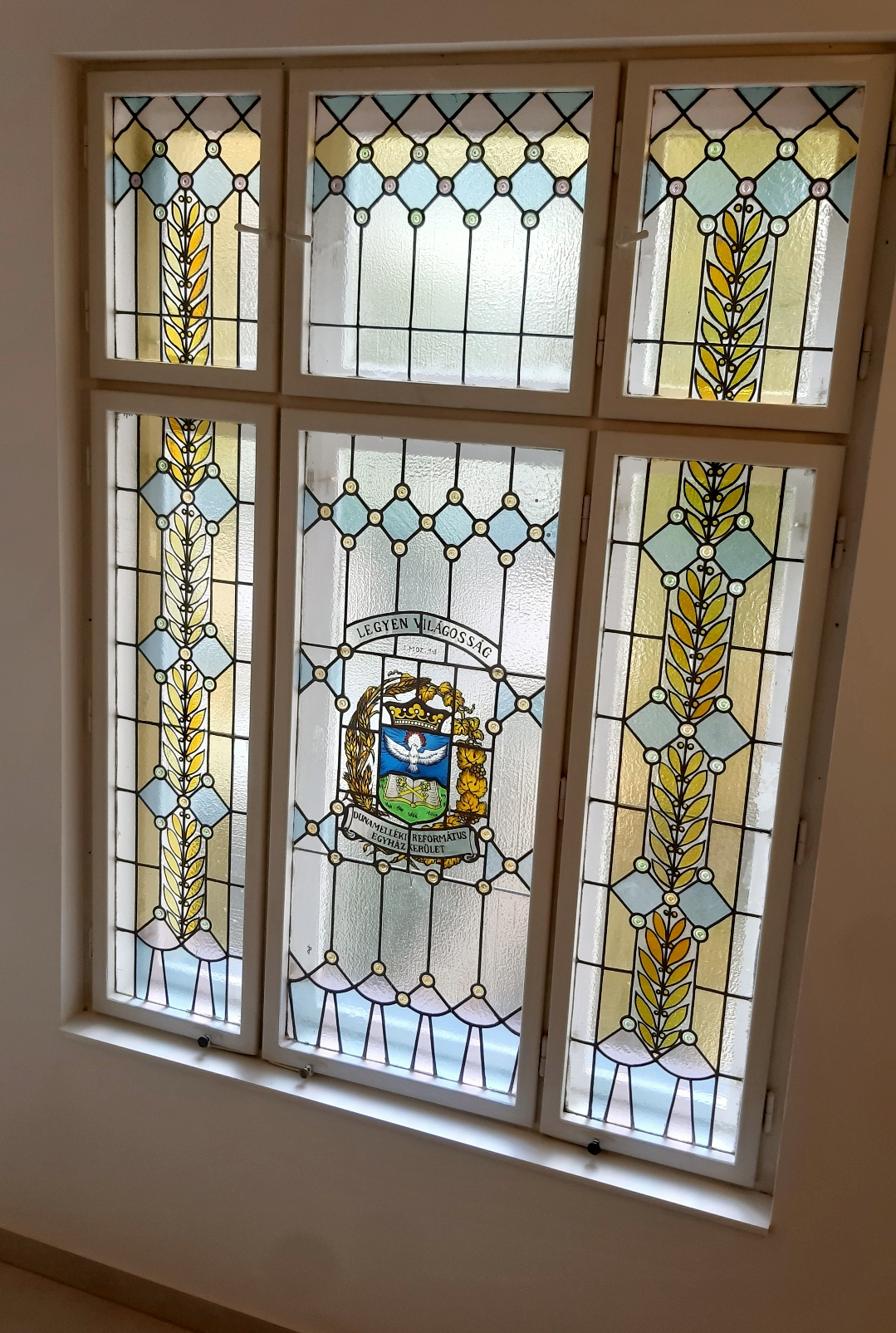 The coat of arms of the church district on the coloured glass window of the old building (Photo: pestbuda.hu)

István Bogárdi Szabó also spoke about it: at the beginning of 2019, he would have just started preparing for the handover of the episcopal service, taking into account what he can hand over to his successor. But on that January day, "all the hymns of self-praise burned in a single night." And to the question he asked himself, why did God take this from him, he answered: so that grace alone would remain the source of his life. As Jesus said to the disciples: “My grace is sufficient for you, for my power is made perfect in weakness." István Bogárdi Szabó quoted the Bible, adding that since then this has become his everyday verb. 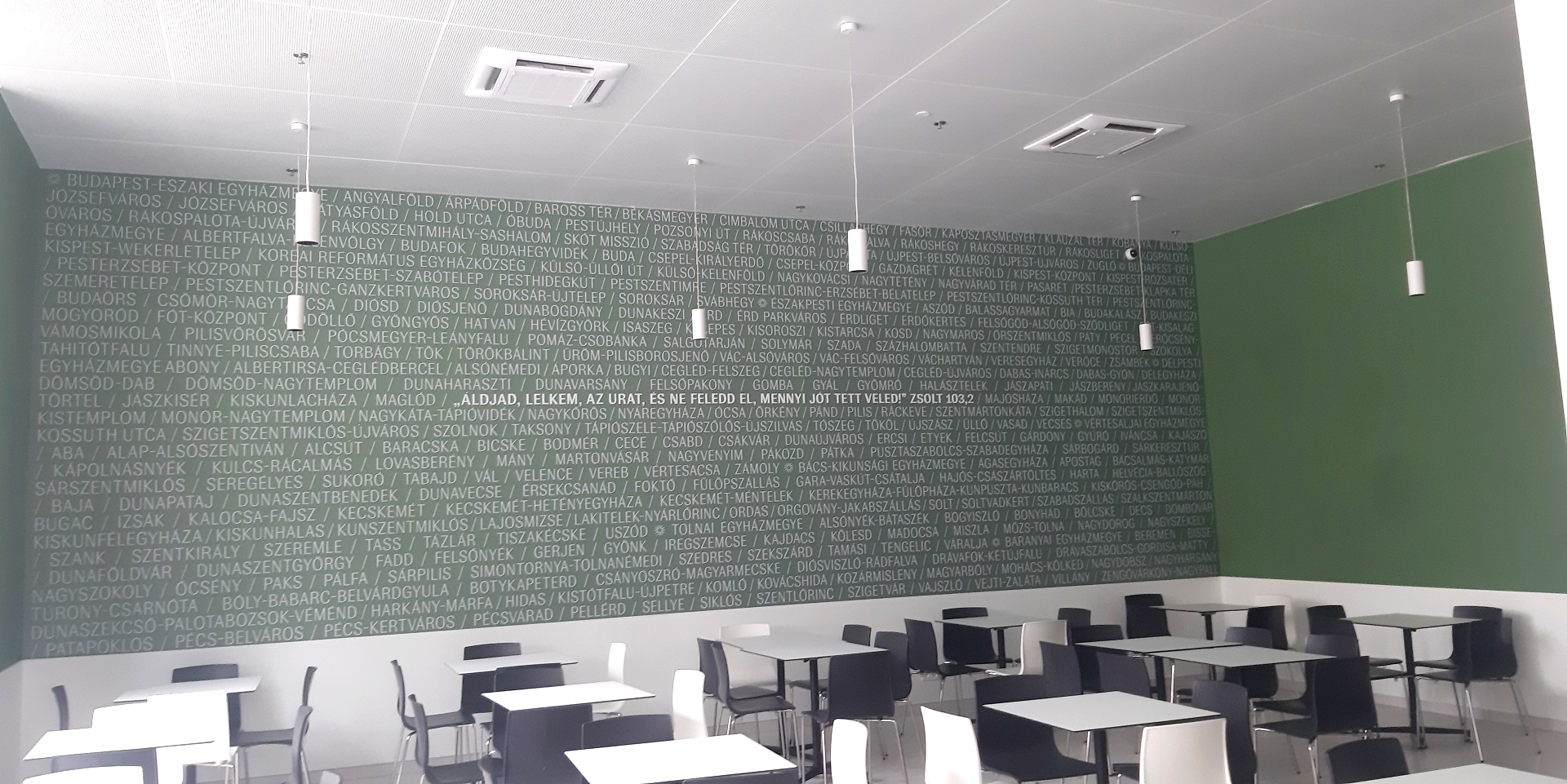 The dining room on the ground floor (Photo: pestbuda.hu)

Prime Minister Viktor Orbán gave a speech at the ceremony. After the service, the ribbon of the building was cut by the President of the Republic Katalin Novák, the Minister heading the Prime Minister’s Office Gergely Gulyás, Bishop Zoltán Balog and the Chief Custodian Sándor Veres.

On 23 January 2019, the dormitory on Ráday Street was set on fire by three juveniles. One person lost their life in the fire, and the building became unusable, so it had to be demolished.

Starting from this academic year, the students of the KRE Faculty of Theology and some students from other faculties live in the rebuilt Ráday Higher Education Student Dormitory on three levels, in 48 rooms. The building can be approached through the new entrance from Markusovszky Square. There is a lounge and a restaurant in the hall on the ground floor. The inner courtyard has been turned into a place to rest, and cars can be parked in the indoor garage one level down. The building also houses an accessible dormitory room, ten guest rooms and three apartments. In the corridors, a study room, a laundry room and a kitchenette, and on the top floor a roof terrace and a community space were created. 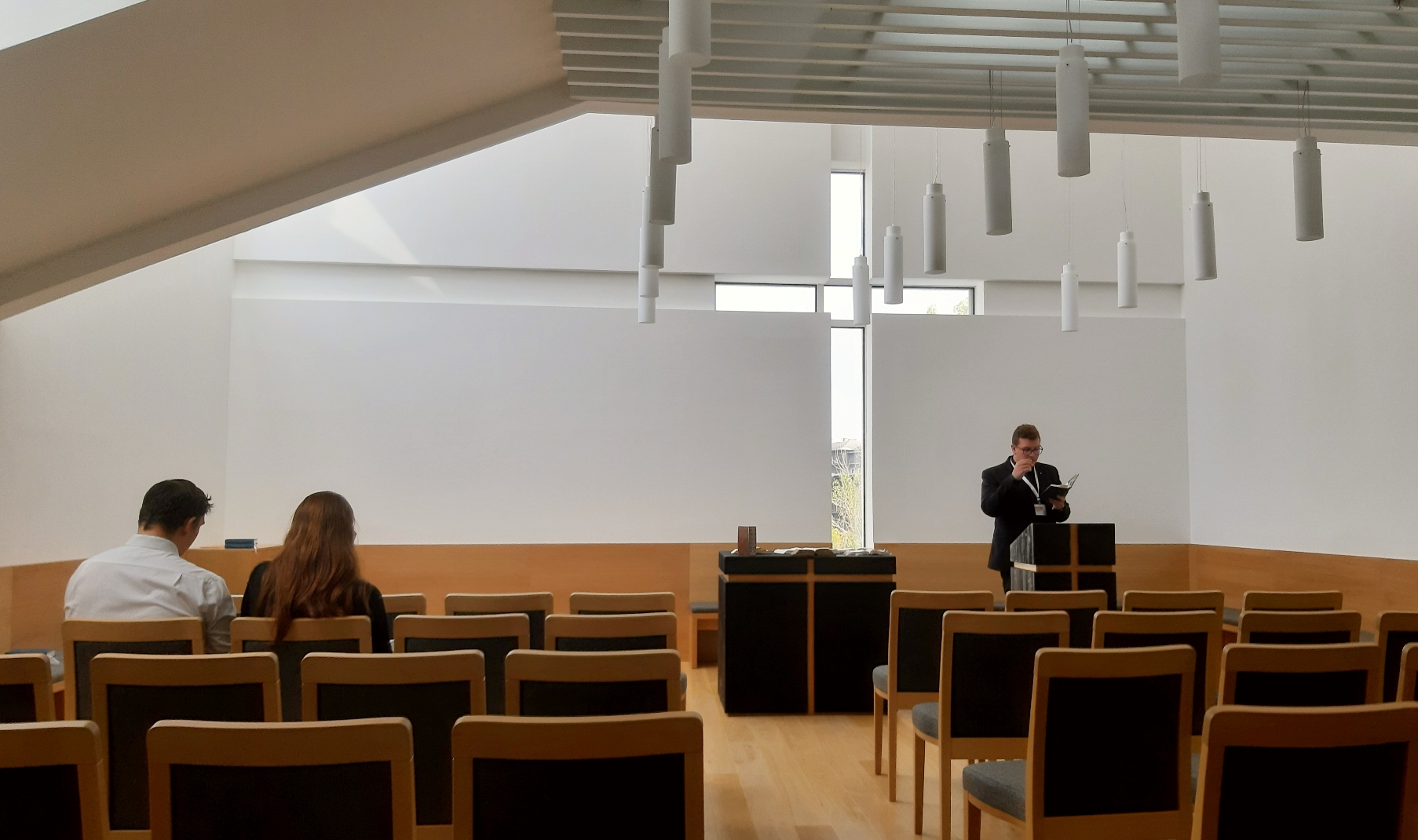 The chapel is located in the attic, and the cross is also visible from the street, from Markusovszky Square (Photo: pestbuda.hu)

In the new chapel, which is also in the attic, the Lord's table was made using the wood left over from the fire, thus preserving the memory of the 2019 tragedy. The building was equipped with an automatic fire alarm and water extinguishing system.

The Ráday House, owned by the Dunamellék Reformed Church District, houses the Ráday Collection, the episcopal office of the church district, the KRE Faculty of Theology and the Bible Museum, in addition to the higher education student dormitory.

Video about the Ráday House

Source: MTI, pestbuda.hu
Cover photo: To the right, the new building of the college accessible from Markusovszky Square from the inner courtyard, to the left, the old Köztelek Street wing, which was taken over in 1912 (Photo: pestbuda.hu)