An open-air photo exhibition entitled Hope and Drama. Hungary '56, will be on display between 22 October and 27 November 2022 in the garden of the Hungarian National Museum to commemorate the sixty-sixth anniversary of the 1956 Revolution and War of Independence.

The exhibition Hope and Drama. Hungary '56 was put together from rarely seen photographs by the Committee of National Remembrance, the Polish Institute and the Hungarian National Museum. The opening ceremony took place on 22 October. The exhibition was opened by Csaba Latorcai, Deputy State Secretary for Priority Social Affairs of the Prime Minister’s Office. After a welcome speech by László L. Simon, director-general of the Hungarian National Museum, Dr. habil. Réka Kiss, Chair of the Committee of National Remembrance by the National Assembly of Hungary held a speech, too. 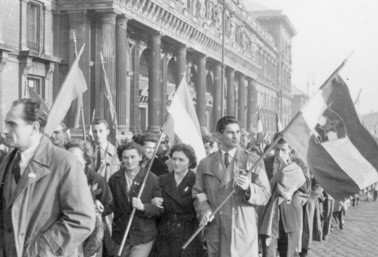